A)  Let’s say you’re training your horse to nose touch a target.  You could deliver the  reinforcer at the target to help make being near the target a good place to be because it is a place where good things happen.  This has an element of classical conditioning in it and this may be a good place to start training targeting.  Or it could be where you start training for duration.  You want the animal to stay at the target, in that “position”.

B)  Or maybe you’re training your horse to go around an object or shaping a spin or some other behavior.  You could deliver the treat slightly in front of where you clicked to encourage more of the behavior you want.  The action you’re clicking for is going around the object, but you feed out in front of where you clicked (a forward position) to encourage more “going around the object”.

C)  Then there’s Kay Laurence‘s shaping plan for going to a mat.  She clicks for coming near to or stepping on the mat but tosses the food away from herself and the mat so that the dog chases after the food but then get to return to the mat for another chance at getting reinforced.  This is another variation on feeding for position.

D)  Feeding for position also includes correcting for positions that are off center or not quite where you’d like them to bee.  For example, if you want your animal to position its nose (or other body part) in the center of a target and, for some reason, it isn’t doing that, then feed in a place that will encourage it to be closer to the ideal.  Let’s say that the horse’s head is too far to the left.  You would then feed it as far over to the right as much as it was off center to the left.  Or maybe even a bit more.  Eventually the horse will conserve energy by staying closer to the center.  (This is called “behavioral economics”.)

Location Part 2, The Importance of the Environment as Part of the Cue

Then there’s the use of location as part of the environmental cue for a behavior.

I’m in the process of training my dog, Sophie, to scratch a piece of sand paper stapled to a board to help shorten her nails.  She got the left front paw very quickly.  (She must be a south paw!)  But we both got very frustrated trying to get her to use the right front paw.

With that in mind, I changed from trying to train both feet in the same place to keeping the right paw training in a kitchen doorway and changing the left paw location to a doorway to the library.  This helped Sophie quite a bit.  After all, we humans may think that scratching with either paw is the same behavior when, in fact, it’s two distinct behaviors.  I’m right handed and using my left hand for something I normally do with my right is definitely a different behavior! 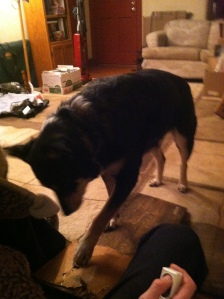 The plan then is to be able to get both behaviors solid in their respective locations and then put them on cue.  Once they are both on solid stimulus control, I can then fade the locations as part of the environmental cue.

Which brings us to:

Location now takes on a different function, that of learning to generalize the behavior.  The environment becomes part of the cue to let your animal know which behavior you might want in that particular spot.  Then you put it on some other kind of distinctive cue, such as a voice or hand or foot cue, until you can bet me a painful amount of money that the animal will perform that behavior when cued and not offer it off cue.

Once you have the behavior solidly under stimulus control, you’ll now want to generalize the behavior to ANY environment or location.

Remember the adage that “horses need mileage”?  That means that they have to have lots of experiences of the same general behavior in lots of different locations to learn that what you want is the same everywhere.  The same is true for dogs and other animals.

I can get ears up from Atticus when he has his head out his window, but not over his stall door.  Why?  Probably because he knows I’m going to ask him to back from the stall gate and his ears were back when I trained him to back up.  I’ll work harder at getting ears up on cue out the window until I can ask for it at the stall gate.

Location Part 4, Where YOU are Matters

This also means that YOUR location has its own effect and value.  Just as much as the training itself takes on an important dimension in your training – that is, where the animal is – where YOU are relative to the animal and also has meaning and you need to train with this in mind as well.  YOU are both part of the environment and part of the cue.

How about standing to the side or in back?  Or facing away?  Or walking around?  Every little detail is important to the training of a behavior and signals different things to the animal.

But sometimes getting from one of those positions to another one causes him to move.  Especially, if I start in that position that most likely will cue the back.  Changing my position relative to them is another training objective.

If I want to start facing him and then walk around him, I need to train so that he’ll stand still and not back up when I walk to his tail.  I now have to train a “wait” or “stand” and put back on some other kind of cue so that he doesn’t just offer it when I don’t want him to back.

Let me know in what ways thinking about location has changed your training.

I play with clicker training - with my horses, dogs, and cats. I also attempt to grow vegetables with the hope of one day being able to feed my family from my garden. My daughter and I are learning ballroom dancing. Well, we were. But she left me for a paying horse job, so now my husband and I are learning ballroom dancing. I'm also now helping Peggy Hogan, of Clicker Training Horses (and The Best Whisper is a Click) to teach people how to train their own horses using "clicker training".
View all posts by Laurie Higgins →
This entry was posted in Clicker Training and tagged backing, clicker training, cues, dogs, feeding for position, horses, location, mat work, shaping, standing, targeting, tossing, treats, waiting. Bookmark the permalink.

Where we care about your dog