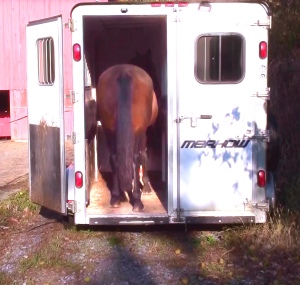 Today was a great day in different ways.  First it was warm!  It got to nearly 70 degrees today and that was a nice respite from the sub-freezing temps we had just a few days ago.  It was sunny but breezy.  Not too breezy.  Just right.

I actually got some work done today!  Did some proofreading for a friend, started bread dough, actually cooked a dinner and made cornbread to go with it.  I must have been full of energy.

But the important part is the horses.  I decided that I wanted to haul Atticus a little bit today.  To do that I needed to work with Ollie first.

Ollie really didn’t want to go near the trailer but he will follow treats, especially carrots and apples.  He LOVES apples!  I bite pieces off and give them to him.

All we did today, though, was party at the back of the trailer.  He scared himself too much the other day so now we have to go back and retrace our steps and make sure that he’s thoroughly comfortable with each millimeter of the process.

Partying at the back of the trailer meant I just fed him treats – one after the other after the other.  Ollie is creative and will always invent new ways to change what we’re doing.  I’ll just support his ideas without trying to “make” him move on through luring in any way.  I’ll feed for position for facing the trailer, but not to get him to take another step or to lean toward the trailer.  If he volunteers a lean or a step, I’ll follow his lead and click and reinforce that choice.

Now back to Atticus.  It was a great day.  Perfect for taking a short trailer ride around the block.  The block is about three miles around.

Atticus now leads me to the trailer by about 20 feet!  He gets on, tucks into the jackpot up front (carrots, Stud Muffin, peppermints, and apple pieces), and I catch up to the trailer and hook up the butt bar and close the back door.  I don’t break those pieces up any more – butt bar and back door go together.

I treated him a little more and then closed the side door.  I got in the truck and off we went around the block.

When we got back home and I opened the side door, he did NOT raise his head high, flare his nostrils, or breathe loudly as if he didn’t know where he was!  This was huge!  This was the first time he didn’t do those things.

I opened the back door and butt bar in one go and he stayed on the trailer.  I went up front and treated him.  I came back and asked him to back off.  He took his time but he did back off on cue and calmly.  We went on a little circle on a loose lead!  He was so calm!  He sniffed at grass a couple of times but would rather have had Alam cubes which I happily gave him.  We made only one fairly small circle (maybe 20 feet in diameter) and he got right back on the trailer!

Of course I treated him again and then asked him to back off.  He was happy to stay there.  I cued him again and he backed off this time.  We began a nice walk on a loose lead back to the barn.

When we got near the barn, he wanted to graze but also saw something new near the house and just HAD to go investigate.  I did not want to pull on him so I went with him as he marched off toward the house.  Unfortunately when he got close to what he wanted to investigate (a large ladder on the ground next to the house), he spooked and bolted.

I’ve learned that when horses act too brave for their own good, they’re taking themselves over threshold and will probably spook and bolt.  He did, silly boy.  He didn’t go too far and I caught up with him again.  He sniffed the ladder and he got reinforced.  He then wanted to investigate the whole yard but now I wanted to get him safely back in the barn.

Next time I’ll be better prepared for his marching off like that.  I’ll take it more slowly back to the barn, get a good rate of reinforcement going as we walk, to try and keep his attention.  And I’ll work more on getting him to turn to me with the slightest pressure.  There are certainly going to be times and places where I’ll need to get him to turn to me rather than march off by himself.

I play with clicker training - with my horses, dogs, and cats. I also attempt to grow vegetables with the hope of one day being able to feed my family from my garden. My daughter and I are learning ballroom dancing. Well, we were. But she left me for a paying horse job, so now my husband and I are learning ballroom dancing. I'm also now helping Peggy Hogan, of Clicker Training Horses (and The Best Whisper is a Click) to teach people how to train their own horses using "clicker training".
View all posts by Laurie Higgins →
Gallery | This entry was posted in Clicker Training and tagged apple, backing, butt bar, calm, clicker training, cues, door closing, feeding for position, foot placement, forward, horses, jackpots, loose-leash walking, shaping, standing, targeting, Trailer loading, treats, waiting. Bookmark the permalink.