I have to admit that I’m something of a training geek.  To be specific, operant conditioning training.  The more I delve into learning about operant conditioning, the more I want to know and understand.  That all comes to a screeching halt when I try to share what I’ve learned with the uninitiated.  And if I delve too deeply, even to people who I thought were well-informed on the subject, I begin to see eyes glazing over.  That’s not to say that I know everything.  I most emphatically do not.  Even my eyes glaze over sometimes, especially when I hear about some detail for the first time.  When that happens, I often think:  “Wait.  What was that?  I thought…”

That being said, for me, knowing more about my chosen craft is essential.  I’ve often said I could be a professional student.  And I don’t always limit myself in the subjects.  But I feel I MUST learn more in order to get better at what I do, even if it is more of a hobby than it is a profession.

So why do others who profess to be interested in operant conditioning/clicker training, too, zone out?  What is it about this process?  Is it that it requires too much thinking?  Sometimes I get that; sometimes I don’t.  Is the jargon intimidating?  Is there too much information in general to process?  I know that when I get in a room full of people who know more than I do, I get a little intimidated and confused.  But at the same time, that unconfidence or not knowing what they’re talking about sends me to the books and the experts.

Maybe it’s my background.  I was a secretary for about 20 years.  I had to constantly know the details of my profession and look for those details to get it as perfect as possible – typos, manuscript style and form, grammar, punctuation, spelling, and on and on.I also danced for almost a dozen years.  Again, constantly trying to improve on those basic dancing skills, looking for more balance, more strength, more fluidity, better technique.  In short, more knowledge.I also rode horses, focusing on dressage, for nearly my whole life.  I started when I was twelve and I still ride today, several decades later – taking seat lessons on the longe line, private riding lessons, group lessons, reading magazines and books – still trying to increase the knowledge base, both physical and mental.

Is it my basic personality or genetics that pushes me to learn more, practice more, strive for more?

In the beginning, I just want a recipe.  A lot of people do.  I get that.  Just tell me which buttons to push when.  Then, when I manage to train myself to do the basics, I want to know why?  Why that button?  Why then?  Why is that a better way?  How do you do that so well?  What do I need to change in order to get better? 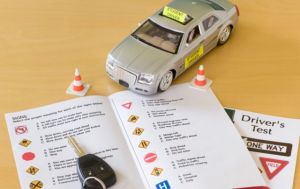 When we learn to drive, it’s simple in the beginning.  We learn the basic mechanics of starting and stopping, turning right and left, operating the turn signals, brake, clutch, and gas pedals.  We start in a big, open parking lot crawling along at about two miles an hour.  As our mechanical skills get better, we speed up a little and get smoother in the operations.  But along the way, we also have to study and learn the rules of the road.When we finally take the test to get our driver’s license, we not only have to show that we know and have practiced the mechanical skills of driving – including parallel parking – but we also have to take a knowledge testregarding the laws of driving in our state and recognize signs, signals, and striping on the road.My ultimate question, then, is what stops other people from wanting to know the details in order to get better or even started on the right path of “clicker training” our animals?

A friend of mine, Jane Jackson of Bookends Farms Ponies/blog, went to a trade fair a few months ago and she promoted her training services and either sold or gave out box clickers.  One woman took one and asked Jane to write down what to do with it and handed Jane a sticky note!  Jane was stumped for a few minutes and finally wrote “Sit.  Click.  Treat.”
Yes, those are the basics.  But there’s so much more to it!
What are the roadblocks for you?

I play with clicker training - with my horses, dogs, and cats. I also attempt to grow vegetables with the hope of one day being able to feed my family from my garden. My daughter and I are learning ballroom dancing. Well, we were. But she left me for a paying horse job, so now my husband and I are learning ballroom dancing. I'm also now helping Peggy Hogan, of Clicker Training Horses (and The Best Whisper is a Click) to teach people how to train their own horses using "clicker training".
View all posts by Laurie Higgins →
This entry was posted in Clicker Training and tagged blocks, clicker training, education, improving, knowledge, knowledge base, learning, roadblocks. Bookmark the permalink.

4 Responses to Why Learn More?

Where we care about your dog